It's been a sports-filled weekend at the Homan house. Kalypso ran in her first cross-country event for the Lusher Lions at City Park. She ran two miles in 18:13, coming in 16th in a field of about 100. 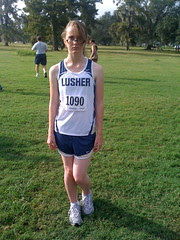 Then we had our first soccer game for the Loup Garous, with Gilgamesh playing and Therese and me coaching. I'm finding it is challenging to communicate to a group of 8 and 9-year-old boys, but fascinating at the same time. We were down 4-0 in the first two quarters, came back to tie it going into the final quarter, but we wound up losing 7-4. Luckily it was a practice game, and we learned quite a bit about positions. 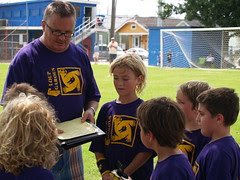 Then I watched the Huskers give away a game to Virginia Tech, the LSU Tigers struggle to beat an 2nd-rate team, and now I'm getting ready to watch the Saints play the Eagles. It's only the second game, but many are saying this game could well have playoff implications, as these two NFC predicted powerhouses might meet in the playoffs, and God knows we'd rather play at the Sacredome. One more picture: 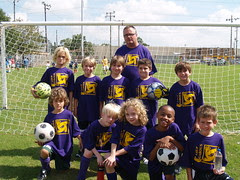 Posted by Michael Homan at 7:41 AM

if yall do a fund raiser for the team selling team swag let me know.

you should blast sunpie barnes' song loup garou from a boom box before each game.

good luck to yall this season.

So you're the coach AND the mascot?

In other Loup Garou-related information, you might consider taking your futbol werewolves on a team-building field trip to see this: http://www.mondobizarro.org/blog/?page_id=441

You might get a discount given the connection and all.