Today Bruce Springsteen closed out the first weekend of Jazzfest. It was pretty emotional for me. Unlike Bob Dylan on Friday, who didn't mention Katrina or New Orleans at all, Springsteen had much in his set that pertained to what happened here back in August 2005. For example, in his cover of "How Can a Poor Man Stand Such Times and Live?" he added the following verse:
"Now there was bodies floatin' on Canal Street when the levee fell, Martha get me my 16-inch and some dry shells. Them who got, got out of town. And them who ain't got left to drown. Tell me, how can a poor man stand such times and live?"
But the most touching moment of the performance came at the end, where he sang a very somber version of "When the Saints Go Marching In." He said it was a gift from New Jersey to New Orleans. It seemed like very few people in the audience lived in New Orleans, but it was a nice gift all the same. Thanks Boss. 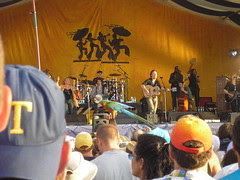 Later note: Keith Spera for the Times-Picayune has a better summary of what happened Sunday night with Springsteen.
Posted by Michael Homan at 9:35 PM