Why I Don't Blame God for My New Orleans Tragedy

I've come to the sad conclusion that the New Orleans that I came to love so dearly is now dead forever. The New New Orleans will certainly have better schools, but it will also have more Wal-Marts. They will build more condos instead of shotgun houses, because condos will be more profitable. The New New Orleans will by and large resemble any other American city, except we'll have a Bourbon Street/French Quarter that resembles Disneyland, only with stripping, booze, and gambling. Who killed it? Who destroyed New Orleans? Well, it wasn't God, or Mother Nature, or even Pat Robertson. Some asshole engineers, incompetent city workers for the Sewage and Water Board, and some local and federal politicians who didn't do their jobs, they are to blame in my opinion. I don't know how they can sleep at night, but I'm sure they find a way to justify all of their actions like some sick sociopath.

Most people I've spoken to about New Orleans think that the hurricane is solely to blame. That there was nothing that could have been done to prevent the city from flooding. That is more accurate for describing the areas East of New Orleans, though they still could have built higher and better levees. But for the majority of New Orleans, including my home and university, the tragedy that happened was caused by humans, and I'm very angry. You see the brackish waters from Lake Ponchartrain that flooded my neighborhood and caused the most damage did not come over the top of the levee. Instead they came under the walls of a canal's walls and eventually the water's force just pushed the canal walls some 40 feet back allowing the lake to waters to flood until the water level inside New Orleans was the same as Lake Ponchartrain. I should also point out that Lake Ponchartrain is not a lake, but brackish water connected to the Gulf of Mexico.

About a week ago I read this amazing story about how people who lived directly across from the canal breach said they complained last fall that their yards were flooding. Workers for the Sewage and Water Board came out to inspect the standing water several times, and some of the workers informed the residents that the water in their yards was not from faulty plumbing or sewage, but actually it was from the canal. But nothing was down about it. And the pylons that were supposed to keep the canal walls in place were only driven into peat. They were supposed to be at least 17 feet deep, but they were only 10. You can read more about it at NPR, and see a picture of where the canal broke below. 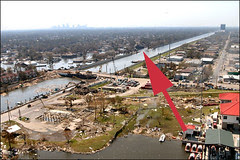 Later note: These journalists at the Times Picayune seem to agree with me, 100 days after the storm.
Posted by Michael Homan at 8:44 AM

*Shakes Head* That's all I can do after listening to NPR.